The Day the Screening Sirens Cried Wolf: Importance of Prediabetes 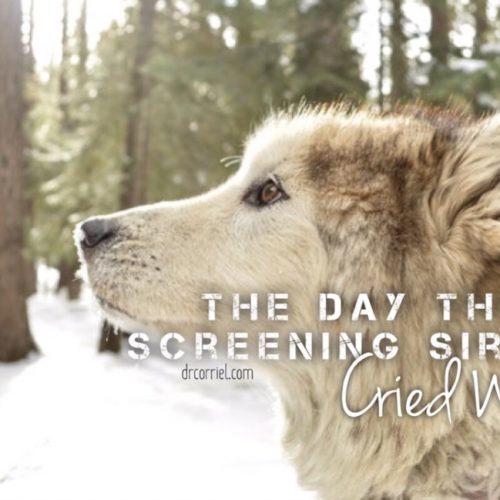 When I think of desensitization, I think of allergies. I picture a child who is administered a gradually increasing dose of a substance he is allergic to, much in the same way allergy shots are given. Slowly, the child’s body learns to become less reactive to the exposure. He grows less sensitive- a desensitization.

With similar methodology to that described above, doctors in this country are becoming desensitized. Not to allergy shots, per se, but to results. Our allergy shot equivalent is the abnormal diabetic screen- the result we receive when we screen for diabetes.

We have essentially become numb to the range that hovers between 5.7 and 6.4- the Prediabetes phase.

The Rise of PreDiabetes.

I came up with the analogy, comparing doctors’ reactions to a ‘desensitization’, after a discussion with a friend over dinner just the other day. She revealed to me, over a bowl of greens and a side of vegetables, that her own Hemoglobin A1C value had been elevated to prediabetic levels, during several different blood draws.

What concerned her was that her own physician had, in fact, not touched on this as much as she thought he would. Not a big deal, she was essentially told. He had pooh-poo’ed the numbers – a response equivalent to a dismissive wave of the hand.

What the Numbers Mean.

Hemoglobin A1C, for those who may not know, is a measure of the average past 3 months of blood sugar concentrations. It is obtained by a simple blood test.

Hemoglobin A1C, for those who may not know, is a measure of the average past 3 months of blood #sugar concentrations. It is obtained by a simple blood #test. #prediabetes #diabetes Click To Tweet

It got me thinking about my own patients’ abnormal A1C values. I see these all the time. They’re not the kind that define diabetes, above the 6.5 range. Those appropriately result in a knee-jerk reaction, calling for change on the patient’s part, right after an initial grimace of surprise or timely look of horror on both the faces of patient and physician – me.

What I do see a lot of are the kind that come before this stage – that gray zone we call impaired glucose tolerance, or prediabetes- values between 5.7 and 6.4. It is a finding that should ring bells – set off alarms – like the harsh sound of the siren which blasts through the sky before hurricanes make landfall. It warns: danger is indeed ahead.

But despite its screech to ‘seek shelter!’, the screening siren lands on deaf ears. It hardly has an effect on anyone these days, it seems. Are we not aware of the damage it can wreak? It’s Hurricane Diabetes, people – save yourselves!

I don’t think that we don’t know about the possibilities, if things were to get worse, I think we’ve just grown numb. In a state of healthcare where all we have is 15 minutes to discuss a change in lifestyle, and we need to use that time to convince our patient – successfully – that our side has more appeal than a McDonald’s Quarter Pounder with French Fries and a Coke, it’s hard. How can any of what we say compete with that? Or with the price point at which it’s offered?

In a state of #healthcare where all we have is 15 minutes to discuss change in lifestyle, & we need to use that time to convince our patient - successfully - that our side has more appeal than a McDonald's Quarter Pounder with French… Click To Tweet

Rates in the Country.

The sad reality of this day and age is that, with the alarming rates of obesity in this country alone, we see these prediabetic numbers all the time. I’d estimate that at least 50% of my patients, who are not diabetic, are in this range. On reading on the topic, I found a publication in Diabetes Care from 2010, which found that 34% of subjects studied had Impaired Glucose Tolerance (the equivalent of prediabetes) using a cross-sectional survey, and, while that number sounded alarming, I guessed that, only one decade later, that rate had risen.

I decided to seek out more updated numbers so I set out on an easily-accessible Google search and found a 2017 National Diabetes Statistics Report from the CDC which reported back on data from the last several years. It was alarming, to say the least. In 2015, an estimate showed 34% of U.S. adults aged 18 years or older (or 84.1 million people) had prediabetes, based on their fasting glucose or A1C level, while nearly half (48.3%) of those aged 65 years or older had the same numbers.

It was confirmed. We are desensitized, as medical practitioners, to impaired glucose levels – prediabetes. The upward trend in abnormal numbers is occurring at such alarming rates that doctors are growing used to seeing them. They subsequently don’t focusing on the necessary change. Results are essentially ‘crying wolf’ and the doctors are no longer impressed.

being diagnosed with prediabetes should result in the screeching of alarms: It's hurricane #diabetes, people - save yourselves! Click To Tweet

Why We Don’t Listen To Our Prediabetes Numbers.

I think of my own practice – to interactions with patients that need to be told- and I cringe at the roadblocks along the way. Not everyone wants to duck for cover, when the sirens go off overhead.

Others put up a wall, or look for excuses. The hurricane won’t make landfall, they say, and convince themselves it’s just a number. It is, after all, just that, in their eyes. Simply a number. If it isn’t a clear and present danger, then it can’t be real, can it? Many of them just can’t see what lies ahead.

I know that part of this problem is the difficulty of change. In fact, Charles Darwin was right on point, when he cleverly said, “It is not the strongest or the most intelligent who will survive but those who can best manage change.”

Like with affordable McDonald’s meals, patients tend to gravitate towards habits which satisfy cravings. That can mean anything from eating greasy foods to spending afternoons in sedentary heaven. Just think of the front end of a convenience store and you have living proof of this concept. Conveniently packed in those front-end shelves are the goods that sell – the sticks of gum and wrapped candy bars. All junk, and all meant to satisfy last minute cravings as you head out the door. I have yet to wait in a grocery store line and salivate through a last minute selection of fruits, glaring seductively up at me from the rows surrounding the register.

I have yet to wait in a grocery store line and salivate through a last minute selection of fruits, glaring seductively up at me from the rows surrounding the register. Click To Tweet

And that time factor, mentioned before – a 15 minute visit! What can you get through in a quarter of an hour? Not even a single TV show. Heck, you won’t even get a hair pull out of any Bravo Housewife in the first 15.

So let’s call an ace a spade and face the realities of today. The practice of medicine has taken a sip of Alice in Wonderland’s Drink Me Potion and subsequently, visits have shrunken down. What we ended up with is a state of healthcare in which not only is a vaccine visit referred to as a drive-by shooting, but doctor and patient are both left behind in the dust, dazed, dissatisfied and confused.

What we ended up with is a state of healthcare in which not only is a vaccine visit referred to as a drive-by shooting, but doctor and patient are both left behind in the dust, dissatisfied and confused. Click To Tweet

What can we do about this growing desensitization to prediabetes?

We need to buckle up and address this head-on. Shake off that numbness and look past the issues, or tackle it with a self-prescribed baby dose of Lyrica, to get the sensation back.

Let’s bring back accountability, on both of our parts. Because our role is to recognize the numbers, and to do something about them.  We need to re-sensitize ourselves so we can properly sound the sirens and get our patients into the shelters they so desperately need to seek.