Alone at the Start.

When I started out on my own social media journey many years ago, as a physician, I was all alone.

Armed with creative passion and the will to make something of it – to somehow find a way to combine the fruits of my imagination with the field of medicine, I set out to create something fabulous.

I wasn’t quite sure of what that ‘something‘ would be, at that point in time, but I knew what I needed to do to make that something happen and it involved time and patience.

But in case you don’t, here’s a recap:

“The ten thousand hour rule is a definite key to success.”

In it, he explains that those who achieve levels of greatness in their fields – known by the utterance of merely their first names – ie, Oprah, Kobe, Ellen – get there only after many hours of practice.

In truth, I’m joking about the ‘exact‘ part, and I hope that you’re picking up on the humor in my writing. But you get the gist.  It’s an approximate, time-wise, and he’s using the number to make a point.

When it comes to my own journey, my own 10,000th hour has been long been surpassed. And I know what I’ve had to sacrifice to get to where I am. Because, and I’m certain that Malcolm Gladwell would agree:

What defines whether you’ve achieved a level of success, anyway?

You. You get to decide.

When it comes to goals in our personal lives, only we get to define our own success.

Success works a lot like beauty – it’s similarly in the eye of the beholder.

You need to define your success. Lay out goals, in small increments, and set them within your obtainable reach. Once there, bask in it – take in all of the happiness in an achievement – but temporarily, because you want to always remain grounded.

Then redefine the next goal and start striving to get there. Simple. You always need a goal to reach for.

If you ever achieve greatness, and exhaust all possible goals – which I don’t think is humanly possible, though this could easily be a topic of debate – then you get into situations that I think of as paradoxically depressing. Like when regular people become really successful celebrities, and achieve uber-famous status, but cannot deal with what comes along with that success. They then turn to harmful behaviors because of their inability to cope.

For physicians, it is a long and difficult road to earn a medical degree. For us, it is no longer about conquering this difficult field, but now we need to navigate through it. Many of us have chosen to take on the digital age in which we practice, and to take out skills into a new forum – a beast known as social media. We now look to conquer this beast.

As I reflect back today, years after my own ‘start’, I recognize that the day I wrote my first blog post on the website (my original, drcorriel.com), with absolutely no SEO or tech-savviness (whatsoever!) was Hour 1.

Scratch that, it was back when I took a break from medicine – my period of self-discovery. When I suddenly discovered unexplored territory – other fields of interest that was available to me, outside of medicine – I realized that life could be made so much.. well, sweeter, for lack of a better term (Or how’s colorful? Or textured? Or even complete?), when you added in these other elements.

I’m speaking about fields I never even knew existed, because the road to achieving my degree is paved with the difficulties of sleepless nights of cramming, and a focus on the sciences that sometimes mimics the blinders on those horses I see around Central Park, their periphery completely blocked except for their trajectory ahead.

It was a time that’s now in my past, my 10,000 hours of dedication to medicine. Except that those hours continue to weigh down on me, and my other colleagues in medicine (who will, in fact, back me on this), as the pressures of maintaining a medical license gets increasingly more complicated.

To Give Up or Not To Give Up.

That is The Question.

I recall a time, sometime around hour 7,583, when I wanted to give it all up.

In fact, I can think of similar feelings around hour 3,490, and even around hour 103. In truth, I’ve thought of quitting every. single. hour. But the passion that I had for what I was doing refused let me stop.

That’s how you truly know that what you’re doing is worth it. Because you truly enjoy it. It’s what you call passion.

I haven’t achieved greatness. Not even close to it.

But what I have achieved are those little aforementioned goals.

Each step of the way, I throw out celebratory cheer with the small successes I conquer. But I don’t stay there too long. I look forward and keep moving. On to the next.

I make my goals easy to reach, and simple – like leveling up on my sons’ video games – but they’re getting bigger along the way.

Networking and making friends along the way – for me it’s not just an added bonus, but an honor, because it’s those people that you rally behind you along the way, that always stay near and dear to your heart.

I may never make it.

I realize there exists the possibility that Malcolm Gladwell may have underestimated. 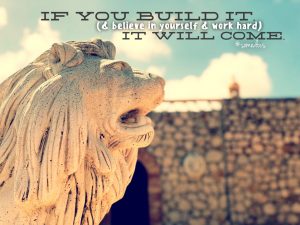 But then I remind myself why I started doing it in the first place, so long ago.

And then I turn on my computer, and start typing.

For your pinning consideration, below:

(helps to gain exposure of my hard work, so thank you in advance!) 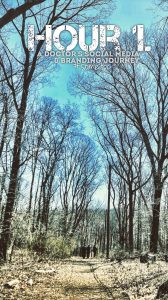