The Human Touch: Yes or No in Medicine? 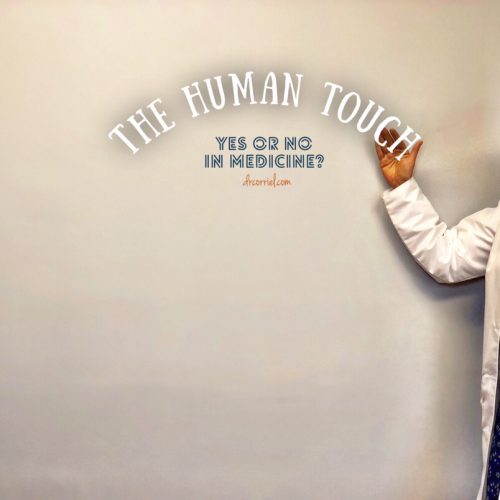 Patients sometimes need a shoulder to cry on.

And while we typically refer to this on a completely figurative level, there are times when an actual shoulder can be of use – a physical crutch to help relieve an emotional load.

I refer to it as art because it IS. Rather than a method set in stone, it’s malleable, changing with interpretation and need. Like other abilities, caregiving can improve with practice, too.

Some may argue that, much like Dali with art, or Einstein with math, certain physicians possess the innate ability to excel in their field. They are inherently more gifted, able to ‘feel’ their way into their patients’ hearts. I don’t mean that in an inappropriate sense, but rather as referring to those with natural proclivity for achieving the perfect emotion-to-touch ratio, when therapeutic breakthrough is pursued.

I grew up watching others around me use this instinctive ability – a form of ‘schmooze’ – to foster relationships, get better grades, and even optimally place into coveted positions. I wasn’t born with the gene that codes for it. Far from it. And so I naturally felt resentful when doing ‘the right thing’ didn’t land me where I wanted to be, like those around me, gifted with the talent.

But that changed. Or maybe I simply grew up and learned to take responsibility for my own fate in life.

Either way, when it comes to caregiving now, years of one-on-one patient interactions have given me the experience I needed to improve my own communication abilities. My newly honed skills serve as proof that Malcolm Gladwell’s ‘10,000 Hour Rule’ truly can materialize, when applied. 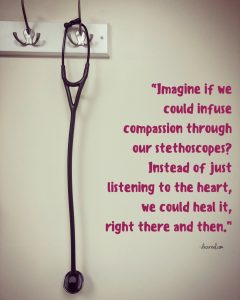 If you think of the concept of ‘touch’ in medicine as having a negative connotation, or if that concept makes you uncomfortable in any way, it’s time to consider the reason why.

Why do we, as a society, think of touch in such negative light, when there’s so much good to it? Why is it negative at all, in fact, when its definition reads as, “affecting someone emotionally,” and leads to significant impact?

Has touch always been wrong, in medicine, or has the latest rise in touch-awareness shaken our confidence? Should we completely prohibit engagement, in any form of touch, even if it comes from a genuinely good place and delivered tactfully, with good judgement? Should we restrict this powerful means of making a difference, simply because we fear misinterpretation?

The idea of experiencing anxiety over incorporating touch in our delivery of care is at the heart of many practicing physicians today. We already worry about what’s right and what’s wrong, from a litigious perspective, on a day to day basis, practicing defensively as a result. We often hold back, and add lengthy, if not irrelevant, steps to our already overburdened visits, all while trying to simply heal. It’s one of the biggest issues dragging down healthcare today. I cover this ad nauseam in an upcoming article, aptly called, “Playing Hide and Seek-Damages With Our Degree: The Need for Tort Reform in Healthcare.” Stay tuned.

Back in 2011, The Washington Post addressed the issue of touch in their article “Doctors Often Struggle to Show Compassion While Dealing with Patients,” where the author, a physician himself, discussed his struggle with showing compassion and learning the importance of its presence in patient interactions. He says, in reference to teaching students:

“A good technique for showing compassion, I told the students, is simple: 3 T’s.  Talk or listen, take time and touch. Merely taking the time to talk and listen to patients is comforting, as is a doctor’s touch.”

His method, however, isn’t necessarily what we’re being taught.

In fact, established medical guidelines often preach that you keep these very emotions out of the patient-physician interaction. You’re told this early on, in medical school, where students are, by nature, in hypnotic states of sleeplessness. It becomes almost mantra-like – a yogic chant of so-called truth – to resist the temptation of letting yourself in to the patient’s world and become too emotionally invested.

The concept is then further solidified into residency training, where, quite honestly, there may not even be time in the day for emotion of any sort to materialize. Sure, you’re moving through the motions, but you’re also doing it all on little sleep and poor health and hygiene, resulting in little more than a state of daze. Someone should really do something about that.

It seems hypocritical, in hindsight, to stress emotional detachment, while simultaneously emphasizing formation of bonds, all with the very same patients. If I wasn’t aware of this earlier on in my career as a student, I’m well aware of it now, as attending.

The Journal of General Internal Medicine covers the need for emotional bonding in What is Clinical Empathy, in which Jodi Halpern, MD writes:

“Outside the field of medicine, empathy is a mode of understanding that specifically involves emotional resonance. In contrast, leading physician educators define empathy as a form of detached cognition.. This article argues that physicians’ emotional attunement greatly serves the cognitive goal of understanding patients’ emotions. This has important implications for teaching empathy.”

Much in the same way that I challenge ‘emotional detachment‘, I also challenge detachment of touch. It may not always be necessary, but when it is, its addition is priceless.

In the context of medicine, and in healing, especially, emotions and touch are not always mutually exclusive. We can combine the two concepts, in fact, and deliver them in the form of empathetic human touch. They fit together so well, like a hand in (latex) glove.

What you get is a valuable tool, with potential for explosive results. When I discovered that power – the magic created with its power, I made the decision to incorporate it in practice. When patients need a ‘shoulder’, I let them cry on mine.

I’m pretty sure Hippocrates would be proud. 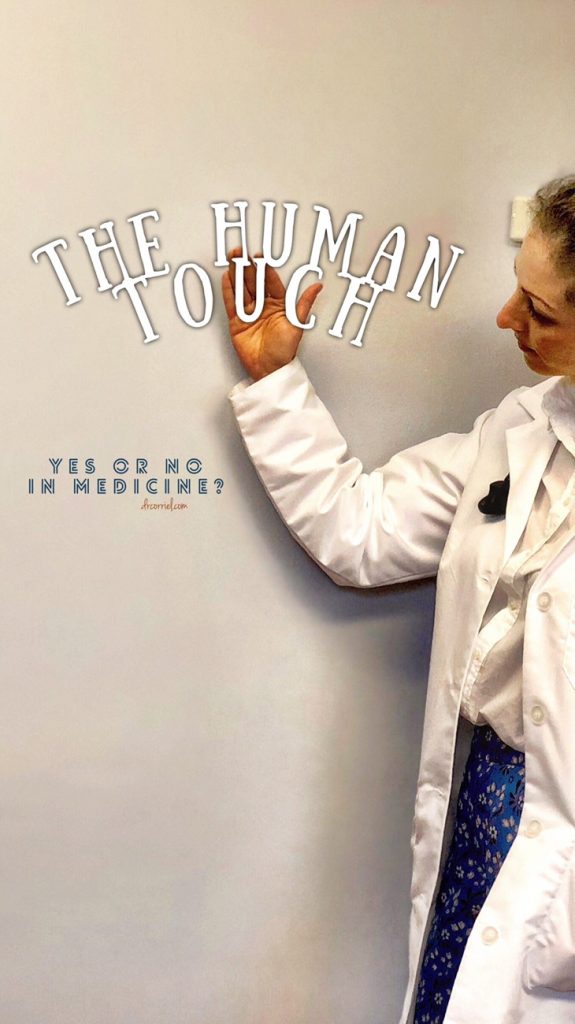