More Than a Photo.

It was taken in Iceland, on a recent trip we took there – my husband and three boys – over a November break.

In the picture, captured by my iPhone, I jump atop a bridge in the middle of nowhere. It felt like we were nowhere, at least. In reality, it was somewhere en route to Snaefellsnes, from Reykjavik, where we headed for a day of outdoor adventure.

But for me, it was also more than just a jump.

It was release. Momentary exhilaration. It was time away from the typical routine of life.

Away from the hustle bustle of day to day minutia, it was a moment of letting loose.

Away from where I lived.

Away from the people I normally ran into.

Away from my job – from the heaviness of a field in which I work, and the seriousness of topics I encountered there, day in and day out.

It was just me and my inner child.

So many of us simply don’t appreciate the benefits of even a little bit of silliness infused into our life. You have the potential to gain so much, when you embrace the inner child within you, and let loose.

I find that we need this, especially today, in the age of modern technology.

Here’s an interesting observation that may convince you, too. Did you know that as a society we’re becoming less carefree?

Here's an interesting observation that may convince you (of the need to let loose). Did you know that as a society, we're becoming less carefree? Click To Tweet

You heard it right. And I personally have a hypothesis as to the why, and it involves the dreaded thing that I’m on right at this very moment; electronics. I believe that they’re in part to blame for the growing issue of mental health disease in our country today. But I’ll save that argument for another post (although I’m happy to entertain comments to that end).

As for the state of mental health in our children, here’s a relevant article in the HuffPost (from way back in 2011!) that confirmed this trend, and further suggested where we need to focus:

“As a physician where a vast majority of my practice is based on the idea of “fixing the leaky faucet before it overflows,” it concerns me that health promotion and disease prevention is not always at the forefront of our minds when we think about our health.”

Prevention, as I’ve always said (and wrote about it in Your Doctor May Need Lessons from the Local Used Car Dealer), is key.

Why do I jump?

It’s not because I grew up listening to Kris Kross, even though they told me over and over again (when I listened and then re-listened to them on my huge bedroom stereo) to “Jump! Jump!” No.

I jump because I’m ‘fixing that leaky faucet’. You know, before it overflows. I’m basically adjusting it, and giving it a quick check. Preventing it from leaking in the first place by addressing its modifiable risk factor. A few moments to clear your head can do wonders in ensuring valves are functional and good to go!

Here is yet another thing to consider, when it comes to how far a small act of letting go, or being silly, can take you: The clown effect.

Have you heard of it? A study in a health journal from 2018 covered it, and showed that:

“.. medical clowns are of value for children with serious illnesses or mental disabilities in several care settings.”

I bet the concept could even be generalized to the entire population. To anyone, really. Even doctors themselves! If we clowned around more, in fact, we may begin to successfully heal ourselves.

I don’t do it enough. I just don’t let loose.

It certainly doesn’t happen when I’m at work, seeing patients. I must remain grounded, especially there. That’s just the way I was taught; it’s pretty much expected.

In fact, many doctors don’t. And it’s quite honestly contributing to our burnout. Like sponges, we often absorb all illnesses around us, but then don’t give ourselves the chance to squeeze them all back out.

Many of us immerse ourselves into the specifics of day to day, and it can be hard separating ourselves from what we see.

It takes its toll.

An article from 2017, written on NBC’s Better, aptly titled, “Sick as a Doc? Doctors Are Burning Out – And It’s Serious!”, had a catchy but oh-so-powerful tagline:

“Why we need to say the words “physician, heal thyself” now more than ever.”

Many #doctors don't let loose. And it's quite honestly contributing to our #burnout. Like sponges, we often absorb all illnesses around us, but then don't give ourselves the chance to squeeze them all back out. Click To Tweet

I don’t really jump at my child’s school, either. Nor when I’m shopping for groceries, or picking up a drink at the local coffee shop, or even when meeting with a friend. I’m an adult, after all, and with that come responsibilities!

Why, I stand tall, saying and doing all of the right things, conforming to all that’s expected of me, on both a professional and casual basis.

But what if I didn’t always do it? What if learned to let go sometimes and simply let loose?

What if we were all to do it, and keep on doing it, on a regular basis? Would we be betraying ourselves, or only the selves we’re expected to be? If we all jumped, wouldn’t there simply be less of them – expectations – in the first place? Besides, maybe there aren’t really any expectations at all! Maybe it’s all just perceptions, and maybe it’s all in our heads!

What if we let go and let loose, jumping on a regular basis? Would we be betraying ourselves, or only the selves we're expected to be? Would there be less expectations? Click To Tweet

The Middle of Nowhere.

There, in the middle of nowhere in Iceland, somewhere between Reykjavik and Snaefellnes, I jumped.

I wasn’t betraying anyone, or engaging in anything nefarious, or out of line. I was being true to myself.

I was being happy – surrounded by the realness of those who love me (I call them my peeps) – and by the raw simplicity of nature.

The Truth About Jumping.

And to be quite honest, I do it on more than just a trip to the north of the wall (any Game of Thrones fans out there? You MUST visit Iceland!). 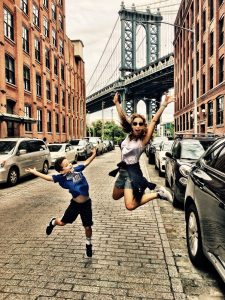 I don’t even have to be between Reykjavik and Snaefellsnes to do it.

I did it in front of the Brooklyn Bridge just the other day, in fact. With my son beside me! I infected him with my silliness, and made him to want to do it, too. Or maybe he did it to me. The specifics don’t even really matter, because we ended up doing it together, and that’s what matters most.

There’s no better place to do it, than surrounded by the people you love. You know who they are – they love you back no matter what it is you do. Even if it involves a silly jump.

There's no better place to do it (to jump), than surrounded by the people you love. You know who they are - they love you back no matter what it is you do. Even when it involves a silly jump. #happiness Click To Tweet

I don’t know how many times we’re supposed to do it – to jump.

I know that I’m a doctor, and that I should theoretically have all the right answers, but even doctors don’t always know.

What I do know is that it’s totally worth finding time to catch your own exhilarating moment in the air.

I hereby prescribe it.. with unlimited refills.

Somewhere Between Reykjavik and Snaefellsnes, I Jumped