Laughter is such a beautiful remedy. What if I told you it came in a box?

I accompanied a close friend of mine to the hospital the other day for a difficult surgery. It wasn’t the procedure itself that was difficult, per se, as it was an outpatient one, but the details surrounding it. They were simply hard to swallow and, in turn, she needed a friend.

I knew my friend could use some moral support, so I wrapped up a toy I picked out earlier that week, at the store, and hoped it would lift up her spirits.

An orange plastic thingamabob with a fat tummy filled with buttons, the toy became an instantaneous hit in the hospital waiting area the second the packaging came off.

As she pressed each of its dark blue buttons, bouts of laughter filled the otherwise somber waiting area.

She smiled, and with each of the sounds that came bellowing out, it grew wider. Eureka! The orange thingamabob I purchased had worked. Worked wonders.

We spent the next passing moments of our time not focused on the tension of waiting for her name to be called, but rather on acquainting ourselves with the different qualities of the laughter produced by our orange thingamabob friend. There were the simple ones, like silly, happy, and funny. But then there were the really quirky ones like goofy, choke, and gurgle. Those were the ones that truly threw us over the edge.

And right there, in the waiting room area, surrounded by the other patients, anxiously waiting for their turn, we giggled the time away.

A bystander approached us at one point, and I braced myself for a nasty comment. I expected it to be about being too loud (I live in the tristate, and sometimes the cold weather makes us cranky). But instead, she smiled, her curiosity peaked at our toy, and she asked where she could get one, too. Read about our consequent interaction in my blog post titled, Leaving An Orange Thingamabob at a Stranger’s Door.

The point of my little orange thingamabob is simple. Laughter begets laughter.

Anyone who is going through a hard time is sure to, even if momentarily, have their spirits lifted once they hear ‘batty‘ laughter, or the obnoxiousness of a cackling wheeze. Just the name cracks me up. Laffy Laffalot.

Studies repeatedly show the immense benefits of laughter, including lower stress, burning calories, and improvements in memory. The Huffington Post, in a 2014 article, quoted a study showing that a sense of humor can protect against heart disease. It also quoted a researcher as saying:

“Incorporating time to laugh, through social interaction with friends, enjoying exercise in a group setting, or even watching 20 minutes of humor on TV daily, can enhance your learning ability and delayed recall.”

Yep, laugher is, in fact, scientifically healthy for you. Which is why I like to take a humorous spin on my own blog and writing. In fact, there are laughter clubs, and even laughter yoga, in place in this country. A study on laughter back in 2009 showed that despite the availability of these, doctors still do not prescribe them. Is reads:

“They are easy to prescribe and there are no substantial concerns with respect to dose, side effects, or allergies.”

I, for one, am not familiar with such programs. But what if you are, I’d love to hear from you.

I do know what I’m familiar with, and that’s that I personally love to laugh, and think that it contributes to my own well-being, as well as that of everyone who surrounds me (read on pleasing yourself versus pleasing those around you in a recent article I wrote). That translates surrounding myself with people who are supportive, and who I can have a good time with.

(Laffy Laffalot can be ordered from Amazon here. Don’t forget the free shipping with Amazon Prime. And yes, the blog does get an affiliate fraction of the cost, used to help post more valuable and entertaining articles. 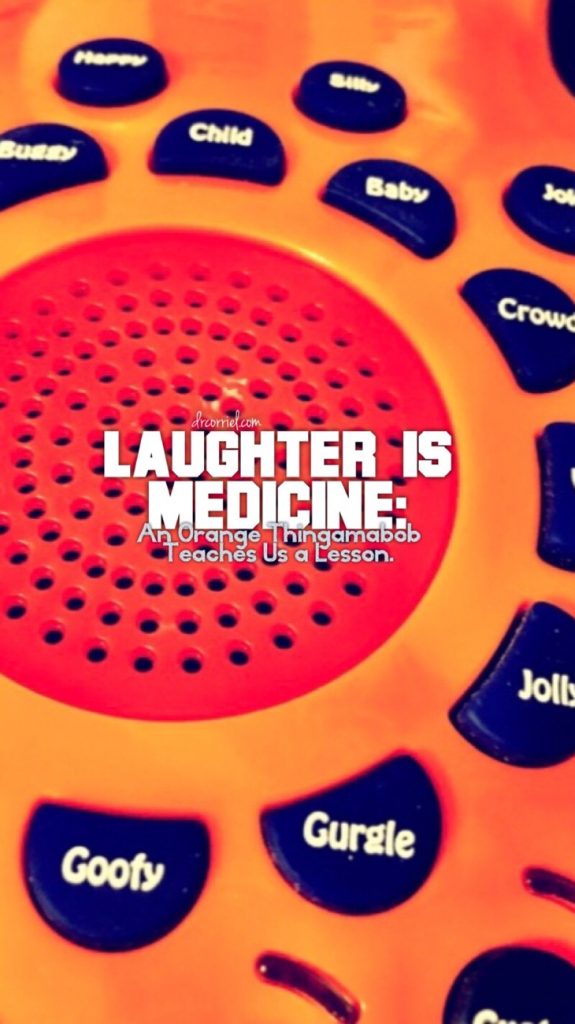 Laughter is Medicine: An Orange Thingamabob Teaches Us a Lesson