Letting the REAL Doctor Stick It In: A Resident Doctor’s story 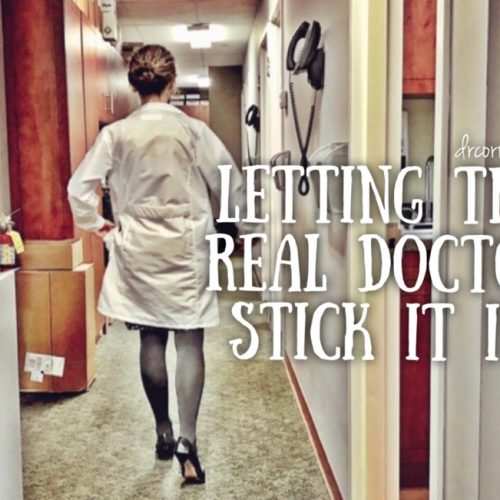 I was a resident – hence likely disheveled or groggy or exhibiting some other form of outwardly display of exhaustion – of the internal medicine program at Albert Einstein University Medical Center/Moses Division, aka Montefiore.

The fact that the program was considered ‘malignant’ by those in my industry – due to the strict nature of its training – likely strengthened the probability of my aforementioned look. Those of you who knew me back then can attest. But please do it quietly, as there isn’t an urgent need to reiterate how badly I looked.

Nonetheless, it was a rite of passage – a ritual needing completion. Though I compare it sometimes to hazing – because the torture techniques used possess similar tactics – the two differ in purpose. One ensures loyalty, while the other ensures competence. In my mind, when u compare the two, they’re basically one in the same. But you know what they say – you say tomato, I say tomahto. And no, residents can’t really call the whole thing off. They would just limit the hours, or lessen the ‘scut’ of it all.

Either way you look at it, I served my time.

Here I was, a third year resident physician, in charge of my own team.

My team was comprised of both interns – suffering through their first year of training, which was the worst year by far – and medical students – still solidifying their medical knowledge base. Together, as a team, we took care of the patients on the floor. Heaven help them.

I served as the boss of the team and we all collectively reported back to yet another doctor in charge, known as the attending.

These revered attendings already served their time, having completed the exact same mission before us. The color in their faces had been partially restored, and I’d often catch myself staring longingly at the glow of their skin, fresh from the weekend’s sun. Having ventured outside during their time off – *gasp* – they were easily identifiable by the way in which they carried themselves through the wards. They knew that, having made it through residency intact, they were now in full command – the top of the food chain.

But during those early morning hours, the revered ones weren’t around. Instead, we graced the linoleum floors – one tight-knit huddle of brains – tending to our everyday minutia, checking in on patient necessities, and hoping that we kept everyone alive. And I was in charge.

On this particular day, one of my medical students – a male – was called down to the floor where a nurse had been unsuccessful in drawing a patient’s blood. He was called to perform the phlebotomy himself – phlebotomy the technical term for the simple act of drawing blood.

This was standard procedure. We were called routinely to patient rooms, if the nurse was unsuccessful at ‘getting a vein.’ Responsibility would then automatically transfer over – the buck always stopped with us – and we needed to take over poking.

A bit more background: medical students followed their own patients, and were taught how to perform said procedures, but were, understandably, still ‘getting the hang’ of things.

I decided to take the team down to the floor myself, after seeing pure fear reflected off of my poor student’s eyes. His dilated pupils spoke volumes, silently pleading with me for help, as his fight or flight kicked in at the thought of his inexperienced hands.

I envisioned the discomfort – both the patient’s and my student’s – in a prophetic sort of way – of the digging, repositioning, and then yet again, the digging that would take place. The patient’s arm would be pocked with holes and I pictured, in a semi-hallucinatory cartoonish state, a punctured jar, its contents spewing through the holes like geysers. The thought itself caused my blood pressure to rise, and I pictured what it could do to the patient. No, he wouldn’t have to do it alone.

The decision was made, right there and then. I was not only the experienced third year resident, but also held title for quickest draw in the west (wing of the wards), albeit in my own mind. It was decided we would sacrifice precious rounding time to show the team how it was done.

I would perform the phlebotomy, I announced out loud. My intention of course, was not merely to put my student at ease, but also remove any of the inconvenience away from the patient herself. The student’s shoulders relaxed and I received a thankful glance. It was how we communicated in those days – with few words – possibly from being too drained to form them.

Our team walked down together, where we found the patient stationed out in the hall, sitting comfortably in her chair. She must have caused a ruckus, and needed to be observed.

We exchanged light banter, as I introduced her to myself and to the team. She had already met the medical student, clad in his short white coat (the difference in length distinguishes an MD from a student, a little factoid unknown to most).

I was there to draw her blood, I announced, smiling.

She looked me up and down, spent the next few moments rather deep in thought, her brows furrowed together. Then – Eureka! – she had it.

“Sweetie, you’re not touching me,” she said, followed by, “I know a medical student when I see one!” 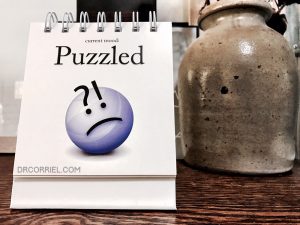 Clearly, she had referred to me.

I chuckled. It was in my thoughts, actually – a knee-jerk chuckle I knew was inappropriate, if heard. She didn’t want to hear any of it. I chuckled again, this time audibly, and an explanation ensued.

I was in fact not the student here, I told her, but rather the resident physician, and had A LOT of experience under my belt. I’d surely get her vein. I cringed at my confidence, momentarily fearful at the possibility of not delivering my promise. Satisfied with the response nonetheless, I turned to get the supplies when, behind my shoulder, I heard her exclaim in my direction:

“Sweetie, I’m not stupid. I know who the doctor is here. You all don’t have to stand around.”

I froze. Had I heard that right? While it was a must that self-care be placed on the back burner while doing time on the floors, I knew I had cleaned my ears just the night before. I turned around, in what must have been a slow motion spin, to confirm what I already suspected.

It was true.  I found her happily pointing to the student of my group – now standing there, like a deer in headlights. Oblivious to this – or maybe just ignorantly choosing to not take notice – she instead aimed her self-satisfied grin directly at me, boasting in the success of her moment of glory.

Running Out of Fuel. 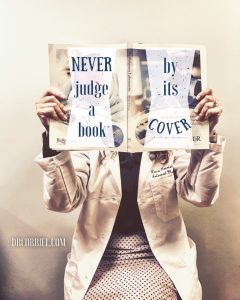 She had called me out, Sherlock Holmes-style. Except that she was wrong.

The student came to my aid – explaining, under his breath, that he was not, in fact, the doctor. “She is,” he mumbled. But our determined patient simply shook her head in disbelief. We were not about to fool her.

So we did as she wished.

Which is where the moral of this story comes in. An oldie, but still, a goodie.

NEVER JUDGE A BOOK BY ITS COVER

I walked away, defeated, in my doctor’s long, white coat, my group of interns and trainees trailing behind in confusion. Behind us, a medical student in short white coat fumbled with the code to the supply room, preparing to draw some blood. 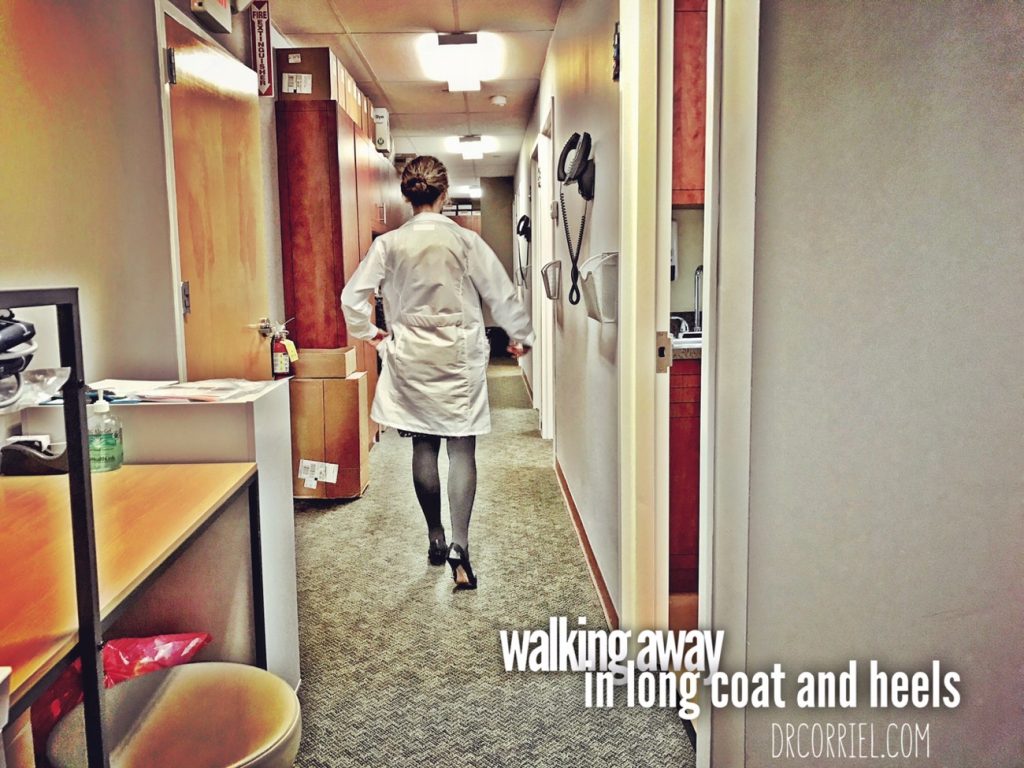 Tweets from the article:

Though I sometimes compare #residency training to hazing - because the torture techniques used possess similar tactics - the two differ in their purpose. One ensures #loyalty, the other, competence. #medtwitter Click To Tweet Patients often ask whether to take #vitamins. Yes! I tell them: Vitamin Z! It's the most important one, & is markedly deficient from the medical #resident's bloodstream. #medtwitter Click To Tweet

For your pinning pleasure: 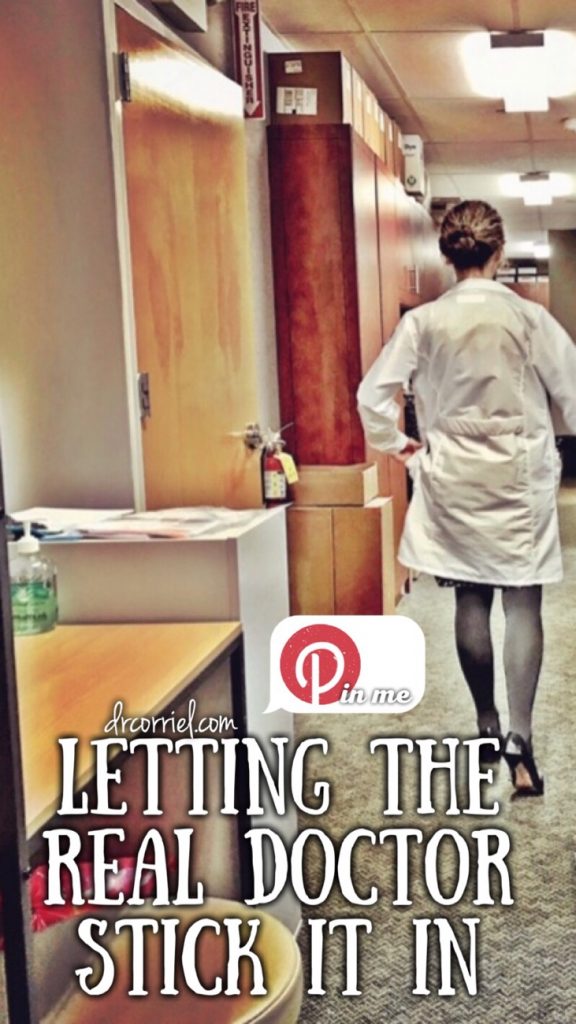