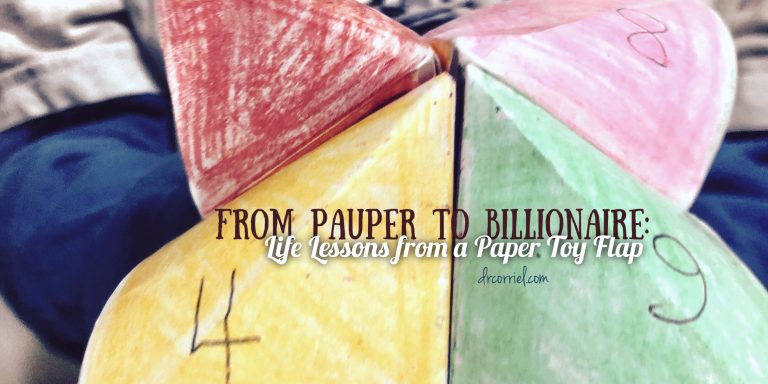 You probably know the toy I’m talking about.

It’s made of a single sheet of paper, folded carefully, but like, a thousand times, along specific angles, to create a fun little toy. It’s then held, between two tiny fingers, which work to open and close the sections up repeatedly, alternating between multiple little pocket folds. When a fold gets landed on, it’s opened, and your fate is then revealed.

My own little guy created one the other day, and then placed me in the tester’s seat.

“Pick a number,” he asked me, jumping at the bit, excited to hear what I’d choose.

“Eight!” I shot back, and the little folded paper crinkled back and forth over his digits, as he counted –

“Pick another number,” he said. You see, the game involves several stages of number-calling. The rules are really rather loose.

Again, his eyes gazed at me in unspoken delight.

“Fifteen,” I picked this time around, to vary things up a bit, and keep it fresh. It also afforded me a few more seconds of watching him squirm in his place, happy as can be.

I waited there, patiently, through the full fifteen count, and my fate was thereby revealed:

I was happy. An instant billionaire! Can you even imagine?

My son, likewise, was thrilled. His mommy had done something quite exemplary with herself. It wasn’t clear to either of us what that was, and yet the endpoint needed no further explaining.

But my riches were short lived.

Despite my desire to end the game there – having earned good fortune rather quickly – my son insisted on playing again.

Twenty total clicks of the paper toy later, and I was a pauper on the street, desolate and poor. Sad, my son turned to me and let me have another go.

I played again, one last time, and it proved a smart move.

“You made a good friend!” he informed me, smiling from ear to ear.

With this bit of news, I announced that the game had ended (channeling George from Seinfeld, who taught so many of us to end things on a high note, including my colleague and funny gal, Dr. Sara Cheng, who wrote on her own real life George-channeling here), and my son scurried away.

I looked on sleepily – for he had woken me up to play – as he hurried down the stairs to another corner of the house, to find his next victim – likely one of his older brothers.

I’m not sure whether it was because he roused me from REM, or because everything I mull over these days is mulled over in metaphor, but I got to thinking in this way, as I laid my head back on the pillow of my bed. That little paper toy of his? That simple child’s toy, made merely of a single folded sheet of paper? That toy was life.

And the little flap within that flimsy toy was you and I, taking our chance on opening it.

That little paper toy of his? That simple #child's toy, made merely of a single folded sheet of paper? That toy was #life. And the little flap within that flimsy toy was you and I, taking our chance on opening it. Click To Tweet 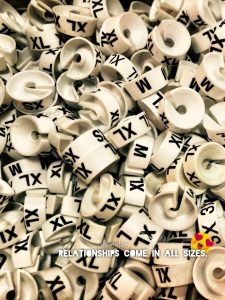 I thought back to the past few months of my own life, and to the various ways in which I had opened it up to chance.

opened up to new friendships,

and even learned a lesson or two about ones that haven’t quite worked out (boy, do those ones sting.)

I was bitter at first – at the ‘ones that got away’; at the relationships and possibilities that had headed south. But I got to thinking about them, and about the important mark they had left on me; on shaping me into the person I was today.

I realized just how crucial they all had been, in enriching my experiences in life.

At the end of the day, we should be appreciating anything and everything that crosses our path; because with every single interaction we have, life becomes richer. Fuller. It’s these experiences that make us rich (I truly have become a ‘billionaire‘ this past year, by opening up to more possibilities!).

Doling out chances, in fact, and taking opportunities on with an open mind is exactly what achieves this – and that, to me, includes: People. Projects. Ideas.

Even when the interactions I took on in my own life didn’t necessarily work out, they still left me with a lasting impression – experiences I could learn from, and never forget. As for those I’ve been lucky to have made, and consequently kept? Well, those are my ‘billionaire flaps’ and I’m more thankful to them than I could ever express.

That’s all anyone can ask for in life.

At the end of the day, we should be appreciating anything and everything that crosses our path; because with every single interaction we have, life becomes #richer. Fuller. Experiences make us #rich! Click To Tweet

So here’s why life, to me, is so much like my son’s paper toy.

Every time we run into someone new, or we’re presented with a new opportunity, a new little choice pocket presents itself within the paper toy of our life. It’s then up to us to turn those flaps over and look inside. So many chance encounters. So many interactions that hold potential for blossoming into something more.

We’re ultimately the ones picking those ‘numbers’, and then landing on that little pocket flap, just waiting to be lifted up, revealing what’s hidden on its inside. We may not always like what we see underneath, but it’s, more often than not, worth the look.

Because the more flaps we open, the more likely it is to hit that ‘billionaire‘ ONE – the person or opportunity – that’s worth a keep. That’s when we essentially strike gold!

So go ahead. Take a chance with your own flaps. Start lifting them up and taking a chance on everything that surrounds you.

From Pauper to Billionaire: Life Lessons from a Paper Toy Flap