I know you’re confused, but allow me to explain.

While at the hospital accompanying a friend for her surgery, I brought along a present, a surprise orange thingamabob called Laffy Laffalot, who I write about in a separate article, called Laughter is Medicine: An Orange Thingamabob Teaches Us a Lesson.

A woman who sat nearby and saw (and, of course, heard) Laffy Laffalot in action came over to see what was making the noise. Our little toy had helped to make friends.

When we showed her what had made the ruckus, her face lit up and she immediately inquired as to where she could get one for her own daughter.

The daughter had been born with a tumor in her brain, she told us, and subsequently removed when she was a child. Now 25, she was mentally disabled, and needed 24-hour care. The woman spoke to me in a soft, sweet voice, but looked very tired. She had three other children, she said, grown ones, who she also cared for and raised.

I decided right then and there that I would pay it forward, and I ordered another Laffy Laffalot, right there in the hispital waiting room.

It turned out she lived in the town next door to  me, and I figured I could wrap him up nicely and deliver it to her home. I don’t normally play Santa in my spare time, but when I can, especially when it involves something meaningful like this, I jump at the opportunity.

She was ecstatic. She gave me her address and we parted ways.

A week later, when he arrived in the mail. I wrapped him up nicely and took a short trip over to her residence, where I placed it at the front stoop. I imagined her daughter’s smile when she arrived from school, my anonymous present awaiting there for her. The best part of it all was that it would be from a complete stranger.. and for no reason at all. That’s how paying it forward works, after all.

It felt great to do it. Really great. So great, in fact, that I took the feeling back home to my boys. Together, we decided to give more back, and come up with ways in which we could do more for our community. You can read about some of the projects we took on (in which I attempted to teach my children about empathy) in the article 4 Project Ideas for Teaching Children Empathy.

For fun games you can play with your children, read the article 7 Educational & Stimulating Board Games for Kids. 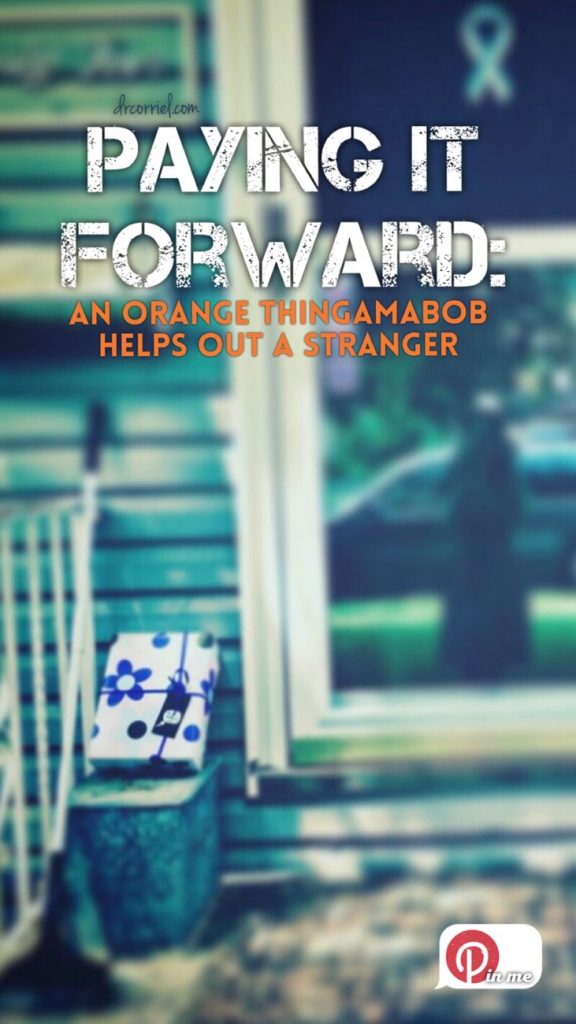 Paying It Forward: An Orange Thingamabob Helps Out a Stranger