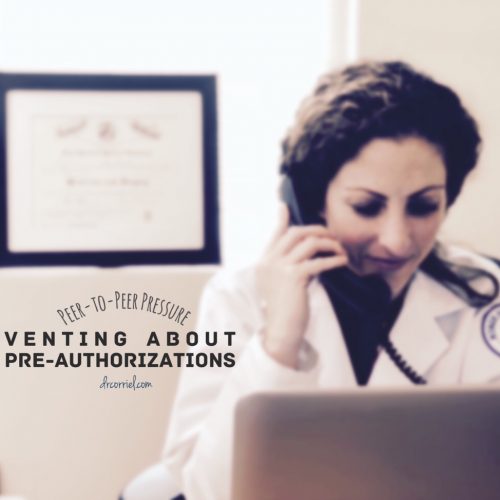 (Vent is Now in Session)

We need to talk.

Although it was once done privately by physicians, airing out healthcare grievances is now increasingly being carried out on public airwaves, on the many forums available to us today (if you’re a doctor, you are certainly welcome to join the movement of those of us who do it regularly on social media, in order to promote positive reform as well as proper education of patients).

We want to be heard because, well, we’re tired. We’re tired of healthcare taking on new turns, on so many levels, while we, the physicians, sit on the sidelines and watch helplessly. Does anyone care what we think?

On this particular day, I pick the topic that affects me most at this moment in time, and it’s because I just got off the phone from a ‘denial’.

Not a personal denial, per se, but one that was handed down in the judgement of someone else – in this case, my patient. And while it may not appear to be personal, it absolutely is. Simply because it involves MY patient.

When it comes time for decision-making, my patients know they are a part of my medical family. Somehow, they just know. I guess it’s something that’s felt, and because of this, they routinely ask me questions like, “What would you do, if I were your family member?” They know I’ll give them the answer straight, even when it may involve a painful one.

So when I got the denial, earlier today, about my patient’s needed scan, I was frustrated beyond words. 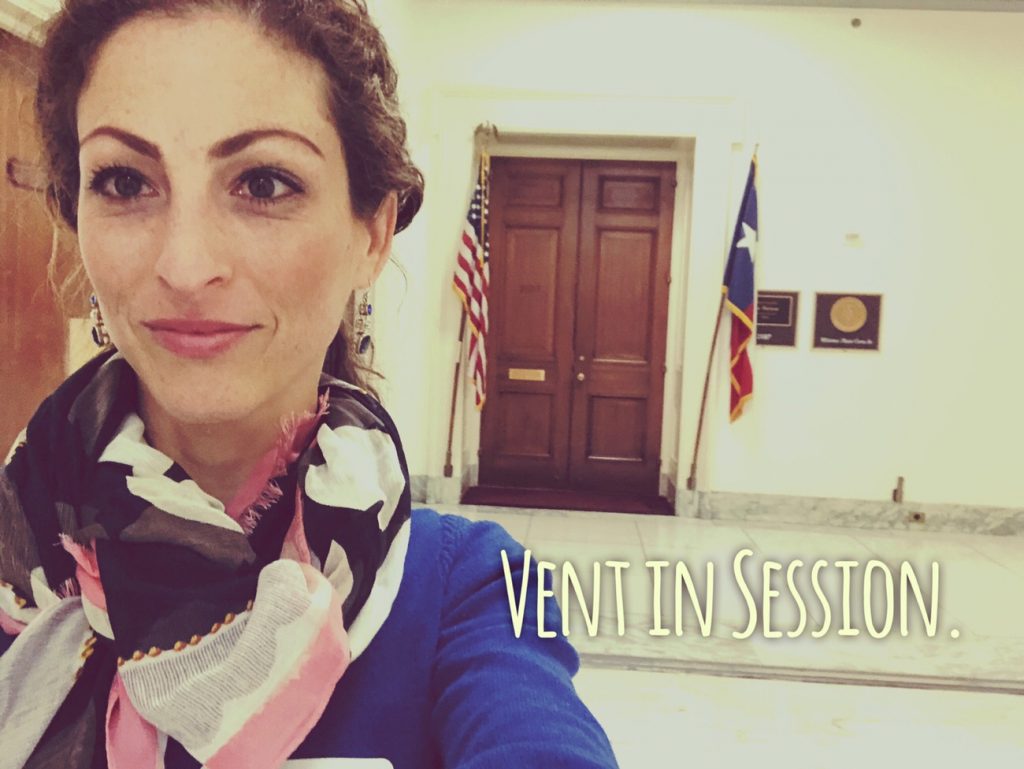 I ordered a CT scan for the aforementioned patient because she truly needed it. I don’t think anyone will question just how I know, because, by nature of my being a medical doctor, I should. But lo & behold, the insurance companies didn’t seem to think so.

Why do they get to decide, you may ask?

Because – frankly – they’re paying for it. Which means that patient lives are literally in their hands. And if you think that the insurance company truly cares about the patient – I mean, really, really cares about their well-being – then you’d be wrong.

I’ll tell you exactly why this whole process (of pre-authorizations) takes place.

It all boils down to one word.

I'll tell you exactly why this whole process (of pre-authorizations) takes place. It all boils down to one word. #Money. Click To Tweet

Money Makes the World Go Round.

I won’t sit here and pretend that money plays no importance in this world. But when it comes to health, we should be better than that.

In my particular ‘denial’ case, the insurance company didn’t want to waste money on unnecessary testing. What frustrates me, truly, is that they insinuating that our orders – the doctors’ – are either unnecessary or incorrect. This, when I already juggle changing guidelines and the fear of litigious backlash.

So now, I must now get on a phone, in what they call a peer-to-peer review, and essentially convince another physician – who, more likely than not isn’t even a practicing internist – that the test is indicated in the first place.

Putting It Into Perspective.

Now let’s put this in perspective – money or not, we’re talking about patient lives. This process is essentially creating barriers, making it less likely that testing gets done – whether because the insurance deems it unnecessary or the doctors themselves aren’t finding time to get on these unreimbursed calls.

When did it become irrelevant anyway, that I’m already a board-certified physician, who practices evidence-based medicine? Why do I need to defend my decision to another physician, as if I’ve been called to the stand at trial, or being tested on the hospital ward, in a medical school rotation?

Shouldn't it matter that I've already passed my boards? Twice, at that! There should be some defined pre-requisite that allows me to bypass this tedious step (a peer-to-peer). I think I've earned the right to decide whether a scan is… Click To Tweet

The Struggle is Real.

Don’t misunderstand, I want the approval to go through for my patient. But if you truly knew how tedious the steps are to obtaining that approval, you would identify with the associated cringe at this struggle.

Forbes magazine covered this topic in, ‘How Does Insurance Change The Way Doctors Treat Patients?’, where the interviewed physician said:

“I spend about 15–20% of my time dealing with insurance companies – advocating for patients whose carriers deny coverage for the treatment they need. I’ve long since given up expecting logical arguments, or honesty, from them.”

I can relate to his words. The worst part of it is finding myself arguing against the person on the other line. Although he’s my so-called ‘peer’, I find that he’s, more often than not, a form of a frenemy. Sharing no more than my title, he typically doesn’t practice clinically, and certainly hasn’t seen the patient whose life is in our hands – or, as in his case, words, rather than hands. He’s a third party decision maker who’s been added to the equation to theoretically save money, but practically make practicing medicine even more challenging than it has been.

The worst part of (the peer-to-peer process of a pre-authorization) is finding myself arguing against the person on the other line. Although he's my so-called 'peer', I find that he's, more often than not, a form of a #frenemy. #socialdoc Click To Tweet

It’s not always easy, either, to defend a decision for a test. Not everyone fits perfectly into boxed guidelines, and you must, at times, think outside of the box, or go with your gut, as an experienced clinician. The insurances don’t allow it.

You would think I’m convincing the person on the other end of the line to declare war on another human. Or prescribe a lethal dose of medication. No, we’re simply discussing sending my patient for a test. One that she wholeheartedly needs, at that!

The conversation with my peer always begins reasonably. But inevitably, it ends in unnecessary – and often ridiculous – questions, being thrown my way. I feel them penetrating, like daggers, through the good intentions of my soul – piercing through all of my hard work – and weighing me down in so that I fall, before ever even reaching the finishing line.

What irks me most is that it’s about the money, where the insurance company is involved. It simply doesn’t want to pay. 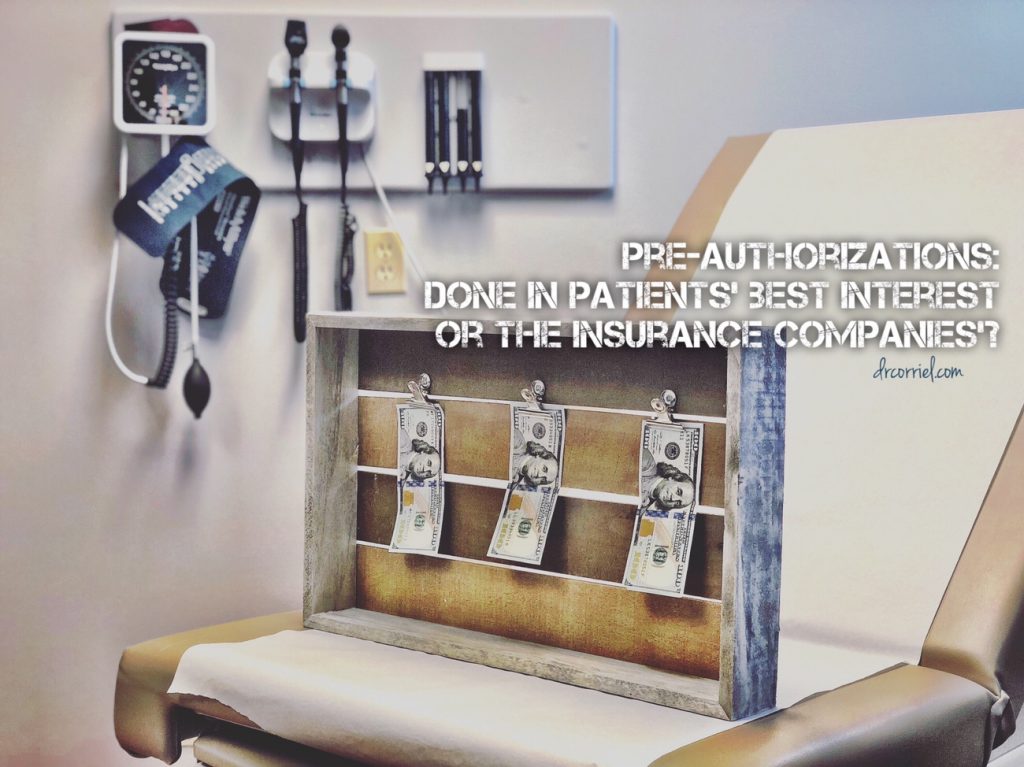 A recent scandal with one of the major insurance carriers of today, Aetna, confirmed these very suspicions, when CNN reported that California officials were investigating the giant. The reason? The company’s medical director, Dr. Jay Ken Iinuma, said he never personally reviewed a patient’s medical records when making decisions about what health care the health insurer would cover.

Yikes! Can you imagine needing to argue my case against ‘caring’ and ‘thorough’ peers like him?

I rest my case.

After what felt to me like groveling, on my end, for her test to get approved – knowing very well it was a necessary step in her workup – I was told, “No.”

I felt the denial weigh down on my shoulders. But things didn’t end there. To read further on what took place next, and how things ended, read Part II, the Surprise Ending.

But in the meantime, here’s what. We need to reclaim the ‘health of healthcare’ in this country, and to put power back into the doctors’ hands. We need to lobby for reform and to see change happen. There may be so much to take back, but we have to start somewhere.