Toot With No Apologies: Treatment for Imposters 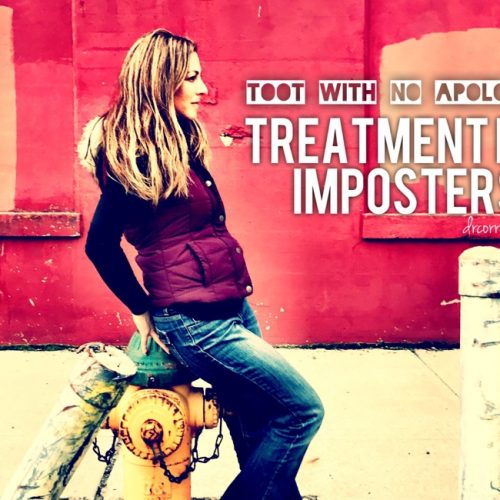 I told a colleague to toot the other day. We just don’t do it enough.

No, really, we need to make tooting a thing.

I wasn’t referring to the beans-beans kind of toot, but rather the toot mentioned in a tweet the other day (by Dr. Emily Methankgkool), as my eyes scrolled down the blue bird’s feed (that’s Twitter for those of you still living under that social-media free rock, and here’s a tutorial for you, at that).

She tweeted about actively writing her personal statement (for promotion to an academic position) and about feeling like an imposter, which I believe we ALL experience in one form or another. Read on what Imposter Syndrome is, if you don’t already know, here.

She went on to ask,

“How do you write about yourself and why you deserve this promotion without tooting your own horn?”

Essentially, I told her to toot away. Not because we should be showing off about all that we do. But because we – especially women – tend to hide the things that we do well. We tend to stow away achievement metals, holding on to them tightly behind our backs instead of letting them shine brightly on our chests.

I mean that metaphorically. They don’t need to actually be displayed on our chests (though they can, in the right setting, of course – my name badge, for example, helps identify me to my patient, the first time we meet). But giving ourselves credit, where credit is due, in the appropriate settings where doing this makes a difference, is priceless. 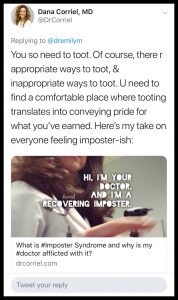 We tend to cower in shame when we’re afraid of being judged. And we – again, often women – are bad at promoting ourselves. A study done by LinkedIn, using 141 member profiles from their platform, in fact, showed exactly this. It showed that:

I see it time and time again. I even see it with physicians who worry about using social media. They want to do it – they see the potential benefits – but they just can’t get past the fears (one of these is fear of judgement). It’s so easy to get sucked in to second guessing yourself, when there’s a world out there that could open up when you simply let go.

To them I say, toot away!

Here’s what’s amazing about tooting: you don’t need to eat a bean, or other magical fruit to do it. You just have to push yourself forward, past your shell. Because tooting can open up so many doors. And we all know that the more doors that open, the ‘better you feel.’

.. without any apologies, at that.

Here's what's #amazing about tooting: u don't need to eat a bean, or other magical fruit, to do it. You just have to push urself forward, past ur shell. B/c tooting opens up so many doors & more doors that open, the 'better you feel.' Click To Tweet