Back in my undergraduate days at UCLA, I joined a group of students who wanted to make a difference for patients, and I became a leader within its ranks.

The group was called the “UCLA Stroke Team’.

To get educated on symptoms and signs of a stroke, and on the importance of getting yourself to the ER, if you suffered from one, and fast.

Once there, physicians had various options for treating you, although one in particular, could be life-saving.

The treatment was called TPA, a clot-dissolving agent that could mean the difference between life or death.

But in order to use it, you had to get in to the ER within a certain time-window. So basically, time was of the essence. 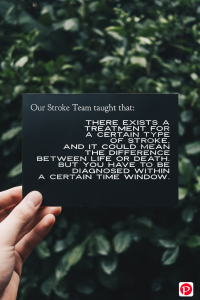 The Role of an Undergraduate Student.

My role included sitting in the emergency department, for hours, even as a mere student, waiting to screen patients for a possible stroke.

It wasn’t necessarily meant for people who already knew they likely were having a stroke, per se. It was more for those who didn’t.

You see, most of the time, ER visitors sit and wait to be seen (unless, of course, it’s an apparent and obvious emergency case, but this isn’t always obvious!). And we all realistically know that it could be a wait of hours.

Our team’s role was to interview everyone with a few basic questions, further identify who needed to be seen more urgently, from a possible-stroke perspective. This way, a time-sensitive diagnosis – with its potential time sensitive treatment – would not be missed.

My presence in the triage area added yet another layer of questioning, and was meant to pick up on small clues that may have been brushed over in the initial assessment, that could indicate a stroke.

So we were essentially identifying missed opportunities.

The team also went out into ‘the field’.

This included senior centers, nursing homes, and community spaces – areas of the general public where speaking about stroke – specifically what it was, it’s identifying symptoms, and importance of getting to the ER – would benefit people most. 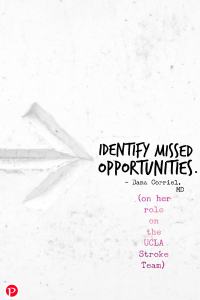 It was quite the incredible experience, especially as a pre-med student, aspiring to play an important role in people’s health, down the line.

I look back at my time spent in both the ER and the community, exchanging words with people who were not only naive to the concept of what a stroke was, but also to its signs and symptoms. I’d like to think I even possibly helped one or two of these people in the process.

Here’s what I do know: that when I think back to that time, I smile.

It was such an innocent time in life, without any real serious responsibilities on my shoulders. I was helping make people better without feeling solely in charge. Care-free. There is something really pure about that – educating about future possibilities, before they actually happen, and possibly saving a life.

A practicing physician today, I have been shaped by years of working in healthcare, I’ve experienced both the good and the bad of medical care.

Here’s what I also know, given this experience: that the work I contributed to, where the Stroke Team is concerned, still holds fresh space in my mind, its content playing an important recurring role in exchanges I have with patients today.

The best part of it all is that, as a young woman, and a mere student, who hadn’t yet delved into the complicated field of medicine, I was already making my impact, and creating bonds with other humans, who I could potentially save; even with no real medical training, and just a few simple words. 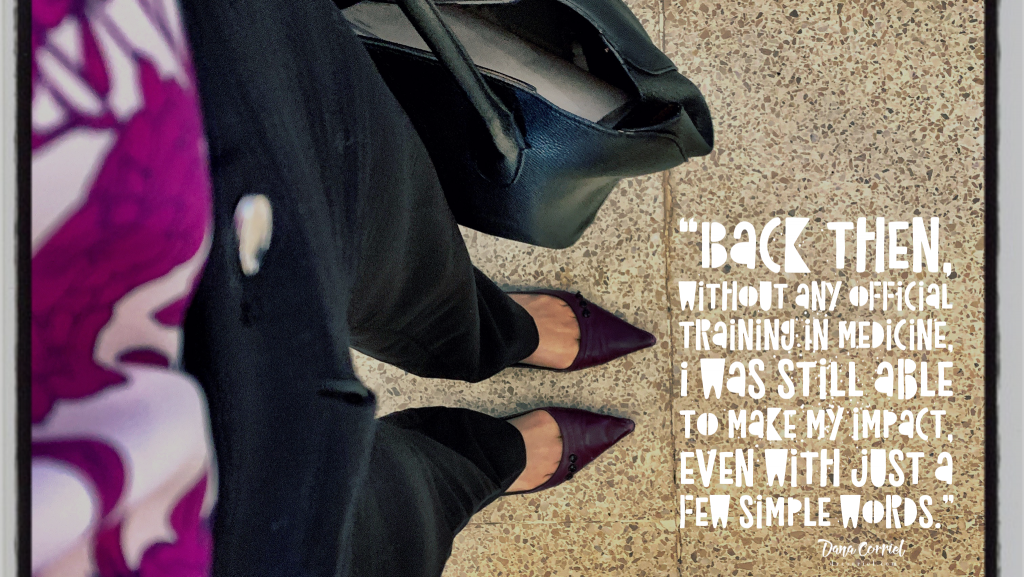 Luke Perry’s death, a few months back, reminded me of my time on The Stroke Team, and immediately took me back to my time there.

Even more, it wasn’t lost on me, upon remembering details, that his starring role was on a ‘little show’ called 90210. That zip code encompassed the very region in which I studied, during those undergrad years.. (UCLA is located in the Beverly Hills vicinity, and that connection made this memory even more special).

At the UCLA Stroke Team, I became a leader within the ranks, under the leadership and guidance of creator Dr. Sidney Starkman. A professor of emergency medicine and neurology, he still seems to be practicing there, giving his time to the same ‘team’ as when I was there.

It’s apparently even turned into a so-called ‘hot thing’ for pre-meds to be a part of, with coveted positions within.

How do I know? Because good ‘ole Dr. Google told me so, when I turned to its vast collection of info and weeded through it to find my history and roots.

I found several articles, one of which stuck out in particular.

Chuckling as I scrolled past its words, I enjoyed playing back the memories, from the days I was there. What really brought the biggest smile to my face, however, was the sentence at this article’s very end:

Many of these “kids” — some 200 have served on the Stroke Team during its nearly 20-year history — have gone on to become physicians, UCLA residents and even faculty in emergency medicine and neurology. Many former students send Starkman notes thanking him for an experience that changed their lives.

“Yep,” I thought, “That’s me.” And I’m heading downstairs this very moment, to write Dr. Starkman a card of my very own.