The Unmeasurable: The Technology Threat of Today (What Side Are You On?) 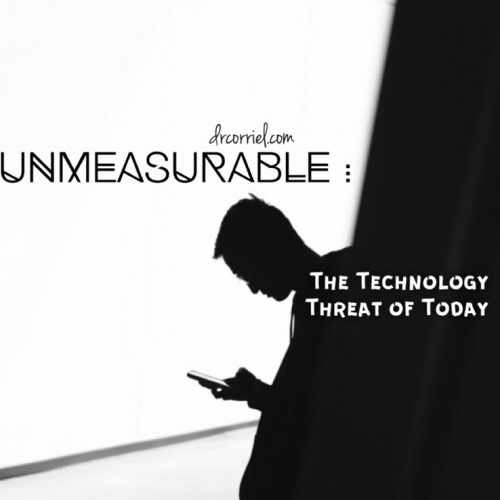 At a point in history when gun-violence in our country is at such an all time high (if you don’t think this is true, then we can at least agree on the fact that it’s being reported more. Oh, and there’s also the fact that gun violence is just plain scary), awareness on the need for increased protection, thanks to open, public discussion, is on the rise.

I know for me, on a personal level, this issue has made it into my own backyard. By that I mean that my community’s public school system has recently taken up talks on budgeting for better security for our kids. Better protection.

But are we neglecting the more common threats to our children’s well-being? Are we placing enough importance on potential threats that may be much more difficult to measure, and occurring on a day to day – and even minute to minute – basis?

(If you haven’t yet figured out what the threat I’m referring to, I’ll give you a spoiler alert – it’s technology.  The internet. Social Media. Electronics. And yes, although I advocate for social media use by professionals like me, for the sake of amplifying a voice, growing a business or building a network, I also raise the possibility that, when in the hands of our still-innocent children, the exposure poses a risk)..

Regardless of which side of the coin you sit on, when it comes to protection, there’s one thing I believe we can all absolutely agree on, and I doubt that any of you would shake your head in dissension upon reading it (though I’m never surprised when fringe-viewpoints are expressed, as this is the internet, after all, and faceless attacks are made in these forums, with much greater ease).

A Call to Arms.

I already sense many of you fuming at the mere mention of these words.

But before you react too quickly, and rev up your engines in preparation for attack, hear me out.

Because I’m not talking about arming against the traditional threat of violence we’ve faced in the recent years – the aforementioned gun violence issue – but rather the threat of a different kind. The Technology Threat.

This Threat Worries Me. A Lot.

We have entered an era of information overload. Constant bombardment takes place daily, in all of our lives, and especially for those ‘lucky’ enough to own cellular devices – the large majority of us, not to mention the majority of our children – and who have access to this information at the ease of a fingertip swipe.

With the evolution of social media, we are no longer subjected to only mainstream media, in the delivery of news – which, in itself, makes one’s head spin- but must now also face countless offers, claims, and promises that the many voices on Facebook and its complimentary forums, have taken up. Literally thousands of them. Sources put that estimate – of social media users worldwide – at somewhere around 3.2 billion These voices have, in fact, grown to such an overabundance, that it becomes difficult to know exactly which one to tune into.. or out.

.. Though, may I add that, the platform you’re on, at drcorriel.com, is a bona fide safe one. Selfless, mid-entry plug.

Literally thousands of voices on #SoMe. Sources put that estimate - of users worldwide - at around 3.2 billion These voices have, in fact, grown to such an overabundance, that it becomes difficult to know exactly which one to tune into..… Click To Tweet

It has become an epidemic, of a sorts – growing with infectious voracity – as individuals flock to the internet to listen, and to be heard. What you get from this all, are throngs of upstanding citizens, unable to always discern right from wrong. When opinions are so rampant, flying at you from every direction, how is one to truly know who to believe? Does the best SEO setup win the favorable opinions of the public? OR the most liked? How about the funniest presentation of information? Or worse, the ones that push the most boundaries?

I don’t know about you, but to me, this is scary. This is exactly where the Kardashians of this world, and the other reality stars come in, as they are often the celebrities that our children – an even *gasp* we – strive to emulate.

At this point, you’re clearly thinking to yourself, “Just how does this fit into the whole ‘arms’ issue she brought up?”

Or maybe even, “What is she talking about? Stick to medicine!”

The Answer May Be Right at Our Fingertips.

But I insist that there’s a connection. It lies in protecting our future generation from threats we may not necessarily be able to quantifiably measure. And I insist that people like me – yes, physicians – must push for awareness on this. We need to be armed.

But here’s where our misunderstanding lies: I don’t intend to arm my society in the standard way in which we typically think of doing it. Erase those images of bazookas and uzis. Or those scenes from Rambo or Kill Bill, or whatever other flick you imagine when we consider traditional weapons of choice.

Because I’m not speaking of standard weapons, but instead, I’m referring to the most valuable weapon of all – and brace yourselves for it – our brain!

It seems a no-brainer, to me (and yes, the pun is absolutely intended here) that we should encourage our children to use theirs, just as we need to use ours to discern whether words we read on the net are trust-worthy or not.

So why does it need to be stated? Why do I feel the need to be Captain Obvious in our plight to do what’s clearly right?

Because times they are a-changing. Because of the exact reasons discussed just a few paragraphs back. Social media is taking over, and we must prepare ourselves and the younger generation for this change.

Because we need a reassessment of how to teach little ones how to use this powerful tool, once it’s in their hands. How to raise them to ‘responsibly post’. How to place limits on themselves, when they’re warranted.

Because our society is different now than it was when we ourselves were children. Filled with new challenges. Advancements in technology may make our life easier, but is it necessarily for the better?

These are all questions that no one truly has the answer to.

I’d take that leap in comparing today’s social media to the cigarettes of older days.

The youth of yesteryear picked up this bad habit without a question as to its negative health effects, back in the day. Each and every teenager back in the 1960’s, for example, held in their mouths the butt of a smoke, and not until their health effects were further elucidated, did it become less accepted, and not seen as part of day to day norm.

Can we truly predict the effects of social media? Even if it isn’t a substance that’s ingested, or inhaled, can we all at least agree that it carries with it the ability to leave behind emotional scars? Especially when used inappropriately?

Unfortunately, the health effects of today’s technological advances cannot be measured in easily quantifiable numbers. We won’t be measuring a change in users’ lung capacities. Or their increased rates of cancer. We’ll more likely need to wait until we feel it. Until our children feel it. Until it starts imposing a toll on our society, significant enough to have societal impacts that affects us as a nation, to even consider funding studies of possible harms.

First and foremost, we need to discuss this as a community.

Parents, reach out to other parents. Reach out to teachers, to professors, and to others in the educational system. Ask your pediatricians, and all the other doctors in your community how they feel this should be handled. Then reach out to your children, and get them involved in an honest and open discussion.

Because social media, and electronics in general, are not only here, but they’re here to stay, and they’re taking over our lives. We need to arm ourselves on this – again, using our brains – and take on these monsters with intelligence, head-on, in the best way that we can.

But not on our own, and not without open discussion that includes each and every one of our players. 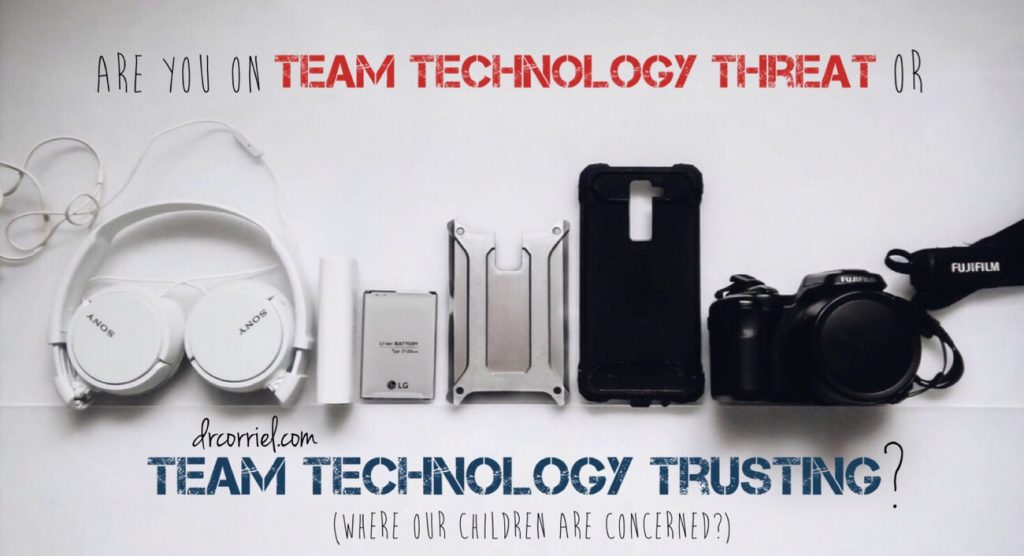 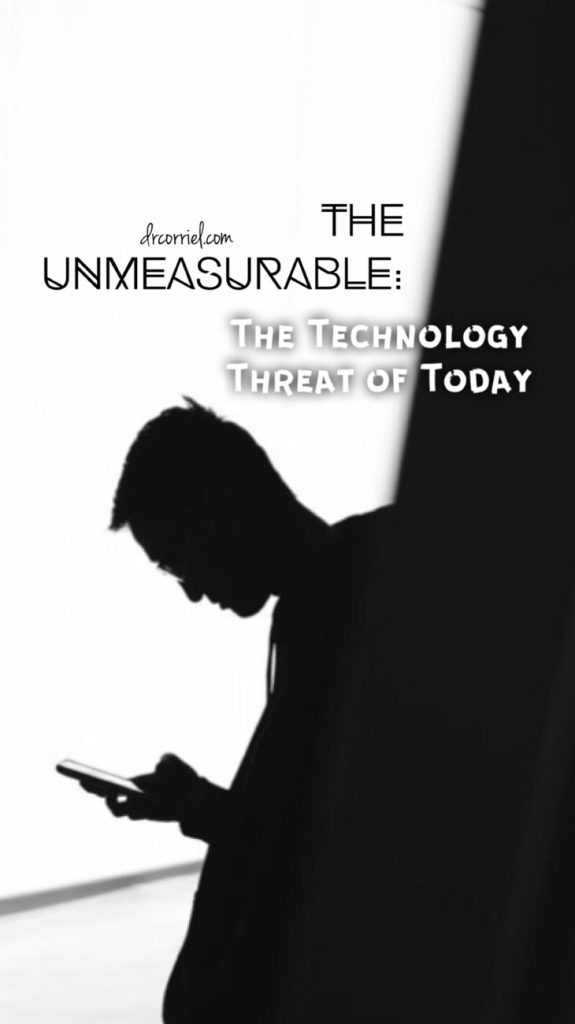