Social media holds so much power these days. The whole thing is simply explosive in potential.

The particular experience I’m about to share wasn’t one of those warm and fuzzy ones; it did, however, help me teach a lesson. 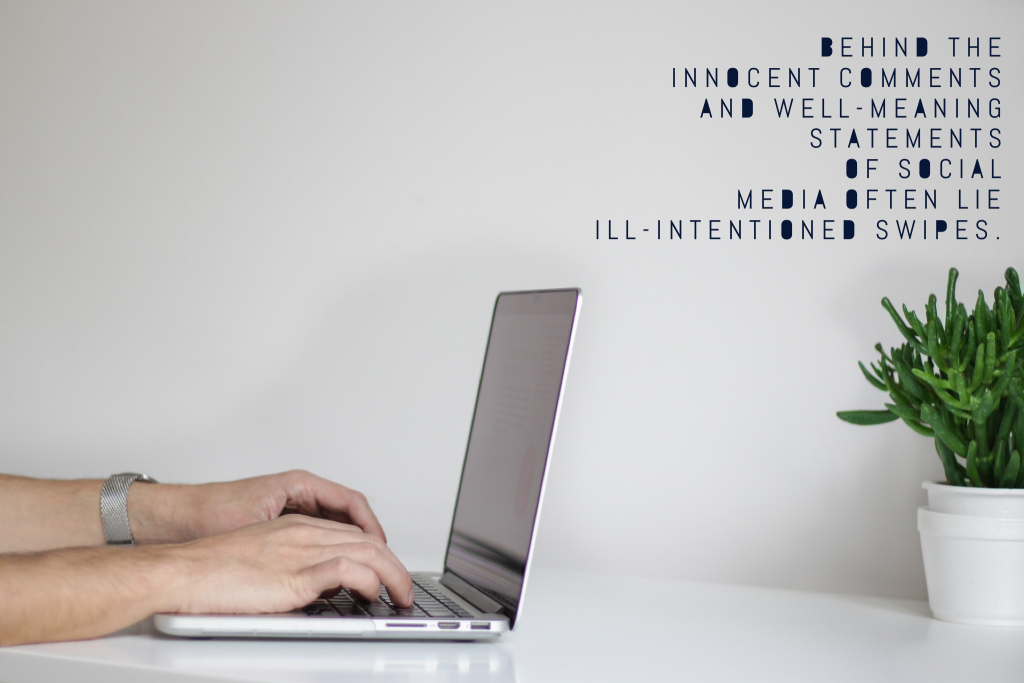 A random Facebook user left a comment on my professional Facebook page several months back. He didn’t know me and I, likewise, did not know him.

That was it. Four simple words.

At least, I think those were his words. I don’t quite remember them in the exact way they were strung, but that was the gist. The expletive, at the least, is a definite.

I acted on instinct, a mere seconds after the shock of his statement wore off. Reflexively, I deleted the comment, without hesitation, and subsequently blocked him from having access to my virtual wall.

And there, with the comment wiped off of my now-clean-looking screen, it ended.

But I regret it.

Looking back now, I feel I should have kept the words there – on public display – for others to see.

Leaving them there would have sent an important message to my readers. Even if they stung, what they stood for was powerful.

It was perfectly fine, you see, if he felt that way about me. Not everyone is meant to like me, and they don’t. Certainly – and I realize this dips down into the shallow depths of substance – not everyone will appreciate the way that I look. 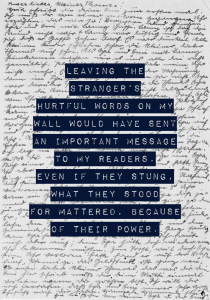 Power of Response on Social Media.

But I don’t just mean that I should have left it there, unscathed.

I could have answered the statement right back.

In fact, it would have served as a testament to the power of words – and furthermore, to the strength of having thicker skin, especially when on social media – to have responded.

A story I wrote a while back, recounting an experience from my own childhood, showed another instance in which powerful words struck a chord with me, and left a mark that remained there for years.

There are two glaring differences, however.

My completely-virtual-stranger‘s words (yes – I’ve named him the ‘completely virtual stranger’ for the sake of making a statement) were meant to hurt, especially in the cruel nature in which they were delivered.

So, if they hadn’t truly affected me, why had I erased them in such haste? Was he not entitled to his own opinion? And did it really matter that he typed out that opinion into words, even if they were blasted on my page?

Maybe it was about the image that we all try and give off, daily, on our glistening, clean virtual pages that caused me to reflexively erase it. Did that mean that I was shallow? Or did I take my virtual life so seriously that I needed to ensure that it was polished?

I hope the second isn’t true, although on a professional page, one must be careful about what they post.

It does get me thinking about our virtual lives – will they one day matter to us more than the ones in we actually live now, in the flesh? I’m frightened to consider if we may possibly already be there.

Part of the realities of today’s society involve hiding behind screens and maintaining our glistening images through our virtually manicured lives. It’s in books for now – have you read the novel Ready Player One

? Pick it up for a real futuristic scare. Maybe some of my regret revolves around exactly this issue, and around my desire to push aside the pretenses. Become real.

I sometimes wonder whether our virtual lives will one day matter to us more than the one in we actually live, in the flesh. I'm frightened to consider if we are possibly already there. Click To Tweet

But then I thought of another reason for my haste.

It’s part of human nature, after all, to shield ourselves from pain, and this often includes shielding ourselves from another person’s negativity. But if I had thought through the benefits of keeping his words up and alive, it would have made a much more powerful statement.

Because, in reality, it shouldn’t matter the least bit if someone thinks of you as ‘ugly’, as long as you don’t feel that way, too.

So here – in this one short blog post – is my chance to finally go on record and officially respond. To flex some social media muscle, in a positive direction.

Here goes the reply I never had the chance to post:

“I’m sorry you feel this way, and that you felt the need to leave such a hateful comment on the page of someone you don’t personally know. And also that my looks offend you. But, from my end, I really don’t care. Because thankfully, I’ve chosen a career in which success isn’t correlated with looks.”

Now, who’s ready show off some of their ‘brains’?